Last Post I talked about the difference between macro level and micro level imitation, a distinction which is hard to justify, but I hope to do so hear.

If we consider the macro level to be characters, plot, setting and so forth, micro is the actual prose, the words, sentence and paragraph structure used to convey the story. I alluded to the fact that people usually care more about the macro stuff (it is after all quite a bit more interesting, and somewhat less pretentious to talk about). However in the, end the words we use as writers are the key to all the cool things we want to focus on in a story.

Broadly speaking copying or plagerising the prose of others is a no-go. In NZ an author and academic (can’t believe this was almost 10 years ago) had their reputation tarnished by lifting direct passages from other writers without any quotation or acknowledgement. As the linked article points out it was at most 2 pages from within a 500+ paged work and yet that was more than enough to call into question the writer’s integrity.

I guess (this post is must shorter than the other one) I point this out to highlight that when it comes to the prose level of writing, the line between inspiration and copying becomes much closer, as writers we are expected to use our own words. Sure play around with tropes, known plotlines, but your own twist on an already established character, but don’t steal words!

That said there are a lot of mechanics that I believe can be used, and used ethically and effectively when ‘borrowed.’ Using another authors scene structure, or studying the way they balance description, action and dialogue are absolutely not plagiarism in my opinion.

So I think the conclusion of both posts is working hard to recognize whats original and whats not in one’s own work. It makes sense to copy elements of other’s works in the same way we learn music by playing other’s tunes. Remember good writing is rewritten not written and creating points of difference between your own work and anothers isn’t a dodgy cover-up its a valid part of a creative process!

When I forage around writing forums for good topics to blog about, there are some common themes. Among writers concerns, there is a a subset of the ‘am I original enough?’ anxiety which is the question of how far is too far when mimicking the greats? or what is the border between inspiration and imitation? Essentially how do I write authentically, accepting that there is nothing new under the sun, without essenntially butchering and repackaging what I am inspired by?

Now to be perfectly honest I don’t have the exact answer, but its a worthy discussion to have!

First of all its wise to point out that plagiarism and idea-theft is a controversial field in creative writing. According to my “exhaustive” Google search there aren’t actually that many legal cases around copying, its really a trial by media arena and in some respects that uncertainty is more scary for new writers than any actual legal action. In fact I suspect that what writers fear more than being genuinely sued is simply having their good name tarnished by accusations, or being prominently accused of writing ripoff material.

And we live in a strange time for this stuff. The ubiquity of online material and the myriad of ways someone can acquire or use other material for their own gain makes the fear of story theft seem more real than paranoia – for instance (apologies for the lack of link there are limits to slamming vague memories into Google and hoping a familiar article appears) one author discovered that their paperback novel, published a decade or two ago and not in ebook format, had been crudely rewritten and self-published by a hack on Amazon. That wouldn’t have been a viable technique pre-internet. On the other hand being able to detect, capture and absolutely destroy a plagerizer is that much more powerful in 2018. The internet loves a good story, especially a good story about a good story getting plagiarized and the culprit’s actions getting splattered everywhere online is going to be popular (and ironically, likely great publicity for the original author). It’s much harder to get away with such behaviour when everything is available to everyone all over.

I guess what I’m getting at is that we live in a world where its easier than ever to rip-off creative work, but just as easy to expose and likely gain from any such attack. Most concerning though is their is no real-rule book. There are plenty of controversies to gossip about but no real case-law or other standards that we can reference to say this is the line not to cross.

So let’s try and make sense of it.

To try and minimize confusion I’m just going to try and use as few phrases as possible to describe the myriad of ways we find inspiration from other’s works, whether we intentionally imitate, derive, explore, twist or try to replicate. I want to be clear that I don’t think any of things are necessarily wrong, in fact most of the best stories are heavily derivative, its something about the way writing comes about or the nature of the final product that makes it work, not avoiding influence or imitation at all costs.

I think it may be worth talking about two levels of writing – in this post I’ll talk about the marco-level stuff, this being the “cool” topics like characters, plot, inciting incidents and so forth, the mirco being the nuts and bolts like prose, scene structure and such (which I will save for another post). The reason I’m doing this is I think the issue is slightly different for both levels of analysis, which will hopefully be justified as I go on.

Let’s get into the macro. Typically when people worry about their own work being derivative they are talking on this level, they worry their villain is too much like Sauron, or the way they gleefully slaughter their characters is too ‘Martinesque.’ But there is something really tricky to talk about on this section – namely that God-awful concept known as PEOPLE’S OPINIONS.

You see readers and reviewers vary in what they notice about a work. I remember as a young(er) man reading the Chronicles of Thomas Covenant, now in that story the MC Thomas possesses a magic ring which is highly powerful, and the villain wants it. “AHA” I thought, what an obvious rip-off of LoTRs. Now I don’t know who out there has read Thomas Covenant but I’m pretty sure that other than the fact the genre is fantasy and there is indeed a magic ring you probably couldn’t get any stories that were further apart. For those that don’t know about Thomas C, I don’t quite know how to put it, other than morally dark and probably worthy of a few trigger warnings.

Anywho the point is that at that time I noticed a similar detail between the books and decided that must mean that Thomas C was too derivative. The reality is though that can happen across any detail for any reader. Some people think all fantasy is the same, try getting away with a magic school in your story for the next few decades, and let’s not talk about romance formulas! Much the same as you simply can’t please everyone with your writing, you actually can’t control the links that readers will connect between your work and others and you can’t control whether they assume you ripped off another work no purpose. I’m not trying to cut my own essay short, but I think its an important point to consider before ruining one’s own work to try and avoid criticism.

But surely there are some lines in the sand. I have to confess I’ve spent a couple of walks on this topic and its hard to come with an answer that doesn’t contain some degree of ‘it depends’ or it’s a matter of ‘degree’ or ‘intention.’ I always hate using intent to define whether something is right or wrong because it sits oddly – if my creative work is a hack job rip-off of Harry Potter does it really matter whether I intended it to be so?

One potential line-drawer is asking what serves the story. Ultimately as writers we want to be producing work that imitative or not does the work of being a powerful piece. Novels especially go through so many revisions it can be hard to question which tweak or draft is the rip-off I think if a writer can say they’ve put together a work that is authentic in terms of creating the best story any imitation is justified. If the imitation serves the writer because they think that rewriting Star Wars is the best way to make a buck that’s more questionable.

In terms of actually comparing content I feel like the question requires a flowchart, because its how different content factors relate that really makes a story. There are probably about a thousand Aragon’s or Harry Potter’s in the fantasy genre, but writers all plunk their characters together in slightly different ways, with unique twists on their situations. I’m going to pull the magic number out and say the limit is 3 if three interrelated aspects of your story line up with another that you’re drawing inspiration from it is probably too close, e.g. if your MC is a magic orphan with a scar you might just get away with it if the story isn’t about a school and the MC is destined to fight a dark lord…

So I’ve rambled a while and this post has taken directions I didn’t expect. Next up I’ll talk about more ‘micro’ level stuff like prose and scenes because I think its a different and complicated subject.

What are your guys thoughts on “borrowing and stealing” is it something you avoid at all cost, believe is a natural part of creative processes?

Where is the line for you? 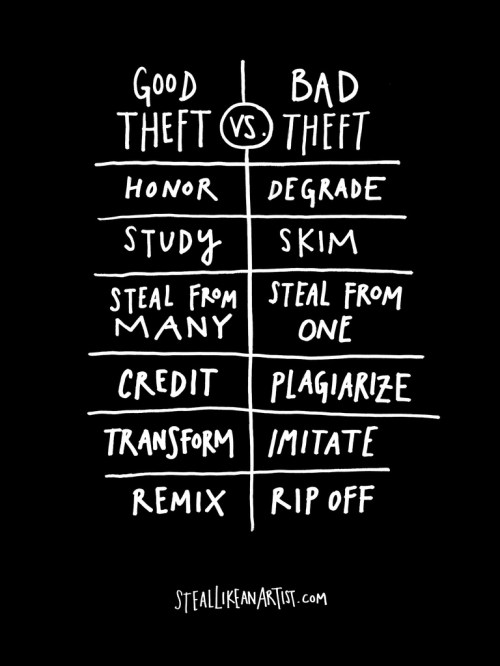 Not a bad article either did they include LINK?