One thing to be said of Thor Ragnarok and of more recent MCU movies, like Spiderman Homecoming, is that Marvel is putting the effort in to keep things fresh 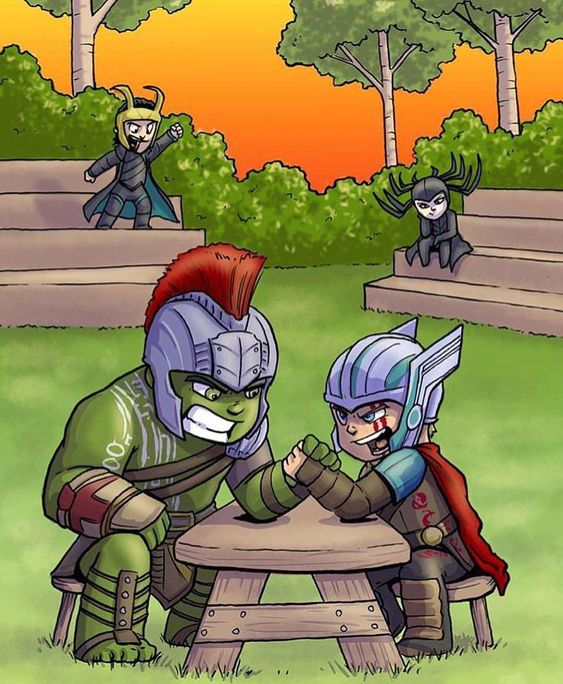 Taika Waititi certainly puts a unique spin on the Thor movies, as other reviewers have discussed changing the Thor character from an arrogant and aloof Asguardian, to well, mostly a doof. Taiki also turns the humour up to at least 11, which shouldn’t be a surprise for a Marvel movie, yet somehow manages to cram even more funnies into any already humour heavy series of movies.

Which is I guess where I’ll start my review. Thor Ragnarok has to be the only movie I’ve seen stretched out by humour. Most MCU movies have frenetic jokes crammed into the action and story, but Thor Ragnarok actually feels like joke sequences and moments are given such high priority it increases the screen-time. And I confess, as loyal as I feel to Taika as a kiwi I do feel the approach to humour is scattershot. There are some absolute gems in this film, Thor throwing a bottle(?) at Loki’s forehead to check he’s not an illusion, imagining what Hulk’s arrival must have looked like to the Asguardians:

Nonetheless there were many moments that I felt the energy of the scenes were sapped by endless jokes, or gags that got in the way. The movie does have heart, the scenes with Odin are poignant – and its super awesome to see Thor go full “Lord of Thunder”

Also once you peel away the jokes and the boss action (it’s kind of weird, the first time I watched this movie I didn’t really appreciate the action or the visuals but the fight scenes are really cool) the story of the film is a little flakey, the Asguard scenes with Hela feel sort of unreal, there is a failure to capture the sense of a whole realm being torn apart by Hela – I just had this weird thought about Galadrial taking the one ring and Hela being the outcome.

All in all, the best thing about this movie, like every other Thor movie, is the brother relationship between Loki and Thor, somehow with each movie the writers manage to deepen and move their relationship on to something different. I love the final moment where Loki catches the lid(?) Thor throws at him, proving he is planning to stay.

Next up Black Panther!