So I recently watched the 2019 reboot of Hellboy and scathing reviews aside there was an interesting aspect to it which kind of reminded me of my own first ever novel manuscript I done wrote.

One of the amateur elements of my work was trying to incorp just about every fantasy element I could think of, I had Werewolves, Paladins, Witches, a Manticore, Faeries and possibly a psychic. In the words of a professional editor I asked for feedback from “it was all a bit much” (2019 Hellboy is similar, it packed with such about every mythos you ever heard of but never feels settled on anything)

Mythology of course is pretty complex at the best of times, see below, but there are ways and means of doing it well, I think… 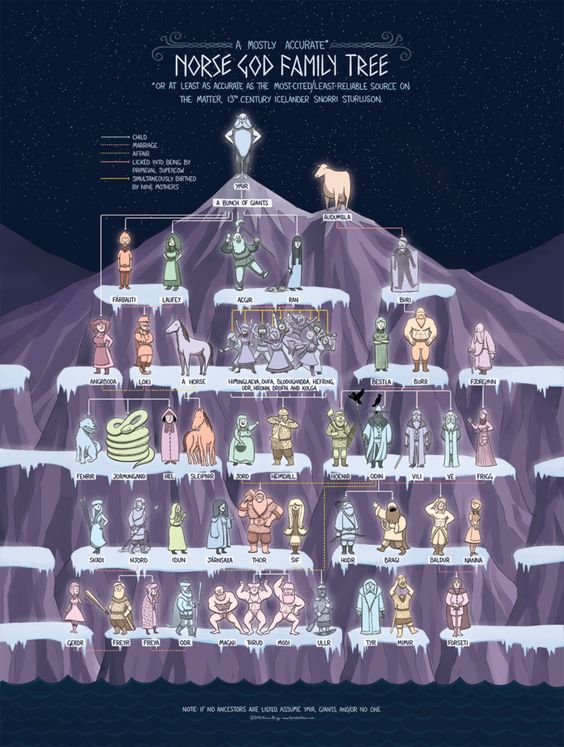 What I’ve observed if there really are two extremes of mythology being incorporated into writing, either its all go, or the world is gently introduced. Good examples of radical and far-reaching mythology can be seen in series like Pratchett’s Discworld, Harry Potter (sort of, Rowling is pretty original with a lot of her stuff). In these books pretty much everything is there and is there right from the get go. The trick I believe is in not trying to have any ‘normal’ included and ensuring there are some internal rules to prevent duex ex machina every second from something mystical.

On the other side are books like Anne Rice’s vampire chronicles, or True Blood where lots of other supernatural beasts are introduced, but pretty slowly over a series which primarily explores vampires.

I guess my point is that not so much that mythology has to be all or nothing, but rather that each extreme requires different world-building and characterization. I think one reason Hellboy 2019 jarred was because there was just a ridiculous amount of magic stuff going on, but it was trying to depict a real world with hidden underground magic stuff (hard to pull off when giants are real and in Great Britain).

Like many writers I love mythology, however I suspect many of us get caught up in showing off our well-read myth chops rather than making relevant stories…

Do you guys have any examples of mythology done great in writing? How about terrible?

(how about have any of you seen the latest Hellboy, what did you think?)

3 thoughts on “On Writing: Handling Mythology”