So I’m probably a fortnight too late to really catch GoT discussions etc, however for the most watched/analyzed and discussed show ever I’m having a bit of trouble actually saying something different, as people more smart, invested and with more time on their hands have already pored over the material. 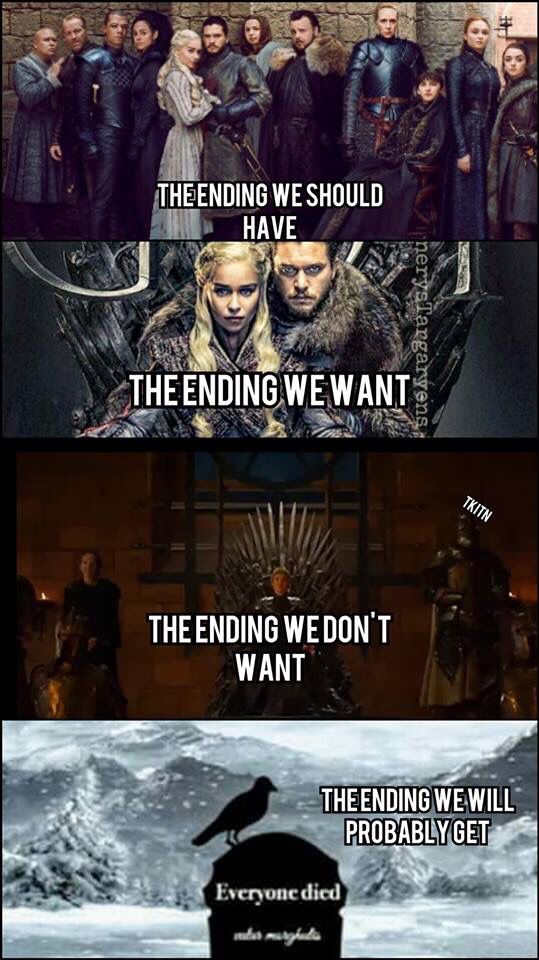 I did have one insight though.

In case you’re reading this from under a rock many people are upset and did not like the final season of Game of Thrones. Complaints run from ruining characters, inconsistency, rushed plot points, and for the most part “bad writing.”

I’m not really looking to get into all of that, however I do have a theory about why the conclusion of GoT is so unsatisfying to many, one that relates to both book and TV show. My theory has to do with the nature of GoT, its sprawling characters, intricate politics and each character’s individual story.

Now here’s the thing, many aspects of GoT overarching plot are not unique. Within the genre of Epic Fantasy, its quite common to have a dangerous supernatural threat from outside the kingdom/realm/land, but conflict within said kingdom also threatens to prevent the human population from properly responding. Also I hope it goes without saying that high numbers of characters is pretty common in fantasy.

Where GoT (by the way I’m just saying Game of Thrones for both written and screened stories, I know that the books are A Song of Fire and Ice) differs however is in the intricacy and nature of people’s stories, along with a fair dose of subversion. For most fans they would describe the stories as a lot of bad things happening to good people, and you don’t know who will die next. How this looks literary though is that GoT is predominantly setup, and does not contain a lot of resolution.

Reflecting on the current 5 books, I realized that part of GRRM’s brilliance is building incredible tensions, and then somehow continuing to raise the stakes. That’s not to say that nothing ever gets solved, but almost always in a manner towards more problems. For example:

I think all the books end on dangerous and tense scenes, not always cliffhangers, but situations that resolve one issue only to create a bigger one.

As mentioned this creates a great story that terrifies and builds investments, however it creates an absolute nightmare for finishing. I could go on and on about all the individual characters and their stakes, but I’ll jump to the wide-scale issue this creates:

Overall what is Game of Thrones actually about?

Part of the problem with so many layers of tension is that as an audience you don’t know which to feel most about. I think the show actually did a good job pulling together so many diverse plots, but part of the problem is creating a sense of an ending. In some respects the ending of the show was like a reveal of what we were supposed to care about the whole time, which is an odd way to feel about a story to put it mildly.

If you contrast with Lord of the Rings, which has multiple characters and plots but one fairly obvious plot thread to focus on, Game of Thrones is an absolute blast to get into, and then an absolute nightmare to resolve.

All I can say it I’m desperate for those books to come out. I think there will be more opportunity to resolve satisfactorily and while I’m not a adaptation nit-picker I am interested to see the comparison.

Thoughts on Game of Thrones – what disappointed you about the show? what didn’t?

via Not as easy as it looks

1. Not only does this site provide generators for established fantasy races/cultures, but it includes real world languages as well as well:

Sometimes I mix and match to create a pleasing phonetic effect appropriate to my culture. For example, the Flaurians are northerners ruled by a brotherhood of knights, so I chose Danish/Scandinavian roots for the northern effect and combined those with suffixes from diff languages (Roman especially) for the grandiose knightly effect. With such results as Laine Caruth; Wynvert Cordray, etc.

2. Another trick is to combine two words. One of my characters for WoW RP was named Jeth Holywrought. (Holywrought being a play on words because he used to be a paladin but became a death knight, so the holiness rotted).  You’ll see this all over the genre; from Magni Bronzebeard to Sam Overhill.